Prudential said to be eyeing P&O. 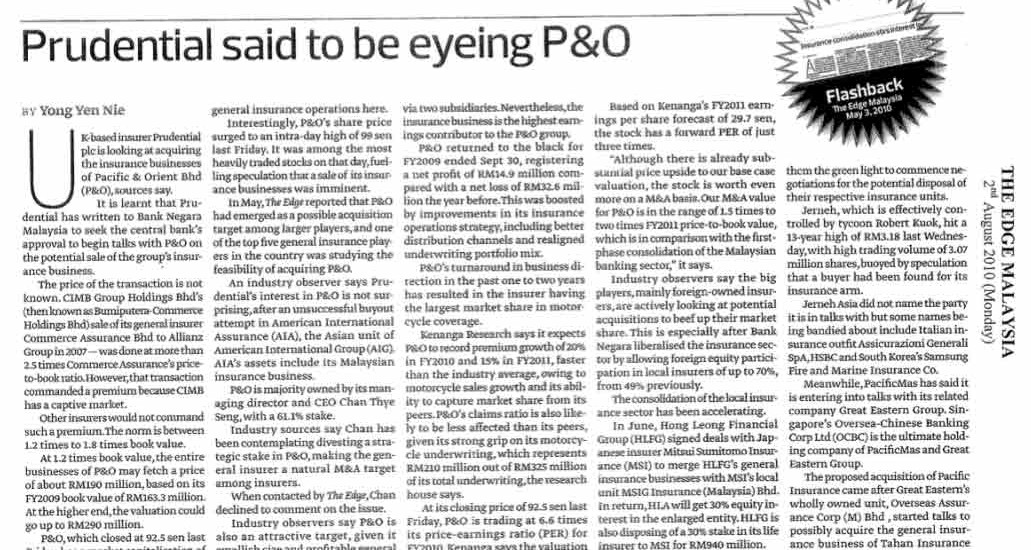 Prudential said to be eyeing P&O.

It is learnt that Prudential has written to Bank Negara Malaysia to seek the central bank’s approval to begin talks with P&O on the potential sale of the group’s insurance business.

The price of the transaction is not known. CIMB Group Holdings Bhd’s (then known as Bumiputera-Commerce Holdings Bhd) sale of its general insurer Commerce Assurance Bhd to Allianz Group in 2007 — was done at more than 2.5 times Commerce Assurance’s price-to-book ratio. However, that transaction commanded a premium because CIMB has a captive market.

Other insurers would not command such a premium. The norm is between 1.2 times to 1.8 times book value.

At 1.2 times book value, the entire businesses of P&O may fetch a price of about RM190 million, based on its FY2009 book value of RM163.3 million.  At the higher end, the valuation could go up to RM290 million.

Interestingly, P&O’s share price surged to an intra-day high of 99 sen last Friday. It was among the most heavily traded stocks on that day, fuelling speculation that a sale of  its insurance businesses was imminent.

In May, The Edge reported that P&O had emerged as a possible acquisition target among larger players, and one of the top five general insurance players in the country was studying the feasibility of acquiring P&O.

P&O is majority owned by its managing director and CEO Chan Thye Seng, with a 61.1% stake.

Industry sources say Chan has been contemplating divesting a strategic stake in P&O, making the general insurer a natural M&A target among insurers.

When contacted by The Edge, Chan declined to comment on the issue.

Apart from the general insurance business, P&O also has money lending and information technology businesses via two subsidiaries. Nevertheless, the insurance business is the highest earnings contributor to the P&O group.

P&O returned to the black for FY2009 ended Sept 30, registering a net profit of RM14.9 million compared with a net loss of RM32.6 million the year before. This was boosted by improvements in its insurance operations strategy, including better distribution channels and realigned underwriting portfolio mix.

P&O’s turnaround in business direction in the past one to two years has resulted in the insurer having the largest market share in motorcycle coverage.

Kenanga Research says it expects P&O to record premium growth of 20% in FY2010 and 15% in FY2011, faster than the industry average, owing to motorcycle sales growth and its ability to capture market share from its peers. P&O’s claims ratio is also likely to be less affected than its peers, given its strong grip on its motorcycle underwriting, which represents RM210 million out of RM325 million of its total underwriting, the research house says.

At its closing price of 92.5 sen last Friday, P&O is trading at 6.6 times its price-earnings ratio (PER) for FY2010. Kenanga says the valuation is undemanding, considering that it is at the low end of the six times to 15 times FY2011/12 PER of local general insurers.

Based on Kenanga’s FY2011 earnings per share forecast of 29.7 sen, the stock has a forward PER of just three times.

“Although there is already substantial price upside to our base case valuation, the stock is worth even more on a M&A basis. Our M&A value for P&O is in the range of 1.5 times to two times FY2011 price-to-book value, which is in comparison with the first-phase consolidation of the Malaysian banking sector,” it says.

Industry observers say the big players, mainly foreign-owned insurers, are actively looking at potential acquisitions to beef up their market share. This is especially after Bank Negara liberalised the insurance sector by allowing foreign equity participation in local insurers of up to 70%, from 49% previously.

The consolidation of the local insurance sector has been accelerating.

Another two listed companies with general insurance businesses — Jerneh Asia Bhd and PacificMas Bhd — have announced that Bank Negara has given them the green light to commence negotiations for the potential disposal of their respective insurance units.

Jerneh, which is effectively controlled by tycoon Robert Kuok, hit a 13-year high of RM3.18 last Wednesday, with high trading volume of 3.07 million shares, buoyed by speculation that a buyer had been found for its insurance arm.

Jerneh Asia did not name the party it is in talks with but some names being bandied about include Italian insurance outfit Assicurazioni Generali SpA, HSBC and South Korea’s Samsung Fire and Marine Insurance Co.

The flurry of developments in the insurance sector will continue to spur interest in P&O.