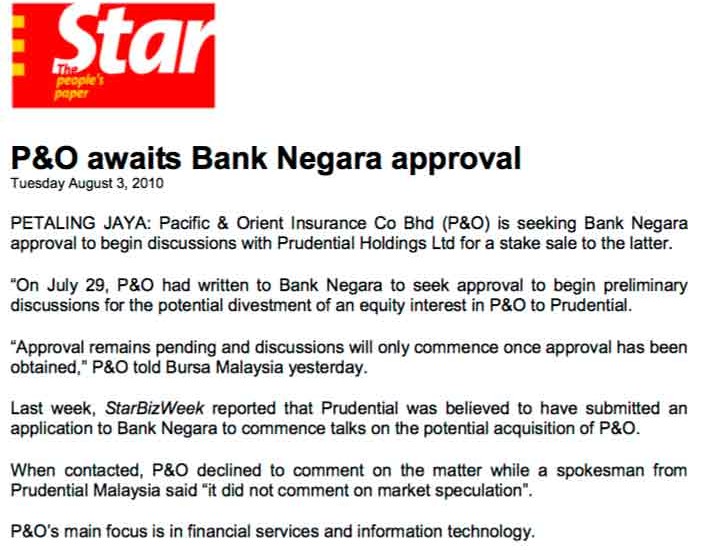 On July 29, P&O had written to Bank Negara to seek approval to begin preliminary discussions for the potential divestment of an equity interest in P&O to Prudential.

“Approval remains pending and discussions will only commence once approval has been obtained,” P&O told Bursa Malaysia yesterday.

Last week, StarBizWeek reported that Prudential was believed to have submitted an application to Bank Negara to commence talks on the potential acquisition of P&O.

When contacted, P&O declined to comment on the matter while a spokesman from Prudential Malaysia said “it did not comment on a market speculation”.

P&O‘s main focus is in financial services and information technology.

Nod for Prudential-Pacific & orient talks. P&O to start talks on stakes sale.
Copyright © 2018 - P&O GLOBAL TECHNOLOGIES INC. | A MEMBER OF PACIFIC & ORIENT GROUP. Miami - Ft. Lauderdale - London - Tokyo - Kuala Lumpur
This website uses cookies to improve your experience. We'll assume that you grant us permission to do so, but you can opt-out if you wish.Accept More
Privacy & Cookies Policy