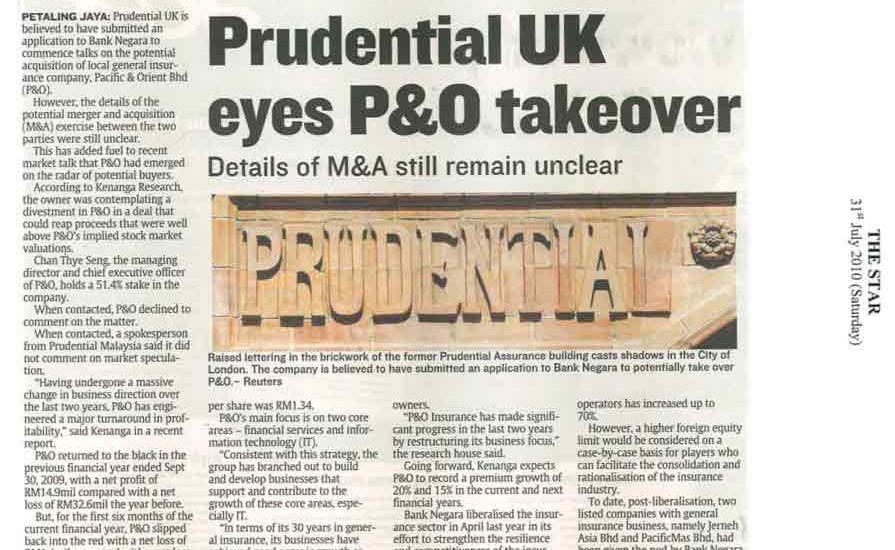 However, the details of the potential merger and acquisition (M&A) exercise between the two parties were still unclear.

This has added fuel to recent market talk that P&O had emerged on the radar of potential buyers.

According to Kenanga Research, the owner was contemplating a divestment in P&O in a deal that could reap proceeds that were well above P&O’s implied stock market valuations.

Chan Thye Seng, the managing director and chief executive officer of P&O, holds a 51.4% stake in the company.

When contacted, P&O declined to comment on the matter.

When contacted, a spokesperson from Prudential Malaysia said it did not comment on a market speculation.

“Having undergone a massive change in business direction over the last two years, P&O has engineered a major turnaround in profitability,” said Kenanga in a recent report.

P&O returned to the black in the previous financial year ended Sept 30, 2009, with a net profit of RM14.9mil compared with a net loss of RM32.6mil the year before.

“Consistent with this strategy, the group has branched out to build and develop businesses that support and contribute to the growth of these core areas, especially IT.

“In terms of its 30 years in general insurance, its businesses have achieved good organic growth as the company cultivates deep relationships with customers, agents and motorcycle shop owners.

“P&O Insurance has made significant progress in the last two years by restructuring its business focus,” the research house said.

Going forward, Kenanga expects P&O to record a premium growth of 20% and 15% in the current and next financial years.

Bank Negara liberalized the insurance sector in April last year in its effort to strengthen the resilience and competitiveness of the insurance and takaful industries.

Foreign equity participation in insurance companies and takaful operators has increased up to 70%.

However, a higher foreign equity limit would be considered on a case-by-case basis for players who can facilitate the consolidation and rationalization of the insurance industry.

To date, post-libéralisation, two listed companies with general insurance business, namely Jermeh Asis Bhd and Pacific’s Bhd, had been given the nod by Bank Negara to commence negotiations on the potential disposal of their respective insurance units.

Analysts say Prudential-P&O merger may offer mutual synergies.
Copyright © 2018 - P&O GLOBAL TECHNOLOGIES INC. | A MEMBER OF PACIFIC & ORIENT GROUP. Miami - Ft. Lauderdale - London - Tokyo - Kuala Lumpur
This website uses cookies to improve your experience. We'll assume that you grant us permission to do so, but you can opt-out if you wish.Accept More
Privacy & Cookies Policy