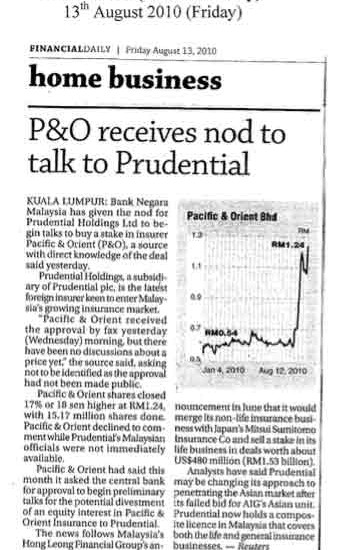 KUALA LUMPUR, Aug 12 Malaysia’s central bank has given the nod for Prudential Holdings Ltd to begin talks to buy a stake in insurer Pacific & Orient (PACO.KL), a source with direct knowledge of the deal said on Thursday.

“Pacific & Orient received the approval by fax (Wednesday) yesterday morning, but there have been no discussions about a price yet,” the source said, asking not to be identified as the approval had not been made public.

Pacific & Orient declined to comment while Prudential’s Malaysian officials were not immediately available.

Pacific & Orient had said this month it asked the central bank for approval to begin preliminary talks for the potential divestment of an equity interest in Pacific & Orient Insurance to Prudential [ID:nSGE6710H3]

The news follows Malaysia’s Hong Leong Financial Group (HLCB.KL) announcement n June it would merge its non-life insurance business with Japan’s Mitsui Sumitomo Insurance Co and sell a stake in its life business in deals worth about $480 million. [ID:nSGE65H02R]

Analysts have said Prudential may be changing its approach to penetrating the Asian market after its failed bid for AIG’s (AIG.N) Asian unit.

Prudential now holds a composite license in Malaysia that covers both the life and general insurance businesses.

P&O confirms Prudential interest. [:en]10 Ways to Keep Your Home Safe When You’re Away[:]
Copyright © 2018 - P&O GLOBAL TECHNOLOGIES INC. | A MEMBER OF PACIFIC & ORIENT GROUP. Miami - Ft. Lauderdale - London - Tokyo - Kuala Lumpur
This website uses cookies to improve your experience. We'll assume that you grant us permission to do so, but you can opt-out if you wish.Accept More
Privacy & Cookies Policy