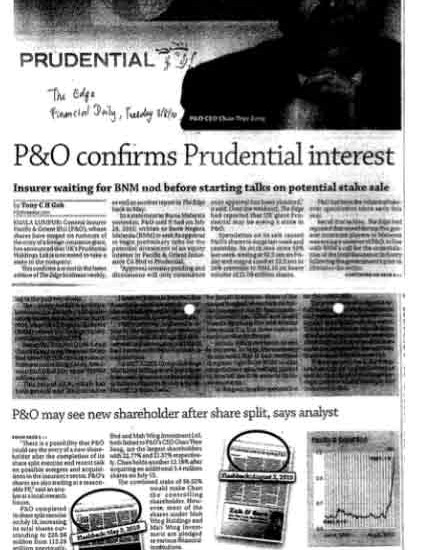 KUALA LUMPUR: General insurer Pacific & Orient Bhd (P&O), whose shares have surged on rumours of the entry of a foreign insurance giant, has announced that Prudential Holdings is interested to take a stake in the company.

This confirms a report in the latest edition of The Edge business weekly, as well as another report in The Edge back in May.

In a statement to Bursa Malaysia yesterday, P&O said it had on July 29, 2010, written to Bank Negara to seek its approval to begin preliminary talks for the potential divestment of an equity interest in Pacific & Orient Insurance Co Bhd to Prudential.

“Approval remains pending and discussions will only commence once approval has been obtained,” it said. Over the weekend, The Edge had reported that UK giant Prudential may be eyeing a stake in P&O.

Speculation on its sale caused P&O’s shares to surge last week and yesterday. Its stock rose some 50% last week, ending at 92.5 sen on Friday and surged another 22.5 sen or 24% yesterday to RM1.15 on heavy volume of 21.08 million shares. P&O has been the subject of takeover speculation since early this year.

Recall that in May, The Edge had reported that one of the top five general insurance players in Malaysia was eyeing a takeover of P&O, in line with BNM’s call for the consolidation of the local insurance industry following the government’s plan to liberalise the sector.

“There is a possibility that P&O could see the entry of a new shareholder after the completion of its share split exercise and recent talk on possible mergers and acquisitions in the insurance sector. P&O’s shares are also trading at a reasonable PE,” said an analyst at a local research house.

P&O completed its share split exercise on July 19, increasing its total shares outstanding to 226.56 million from 113.25 million previously. Kenanga Research had estimated the stock was trading at a forward price-earnings (PE) ratio of just over eight times. As at March 31, 2010, P&O’s net tangible assets per share stood at RM1.34.

Both Jerneh and PacificMas announced in December 2009 and April this year respectively that they had received the green light from BNM to start negotiations with potential buyers for their general insurance business.

In P&O, Mah Wing Holdings Sdn Bhd and Mah Wing Investment Ltd, both linked to P&O’s CEO Chan Thye Seng, are the largest shareholders with 22.77% and 21.57% respectively. Chan holds another 12.18% after acquiring an additional 3.4 million shares on July 13.

The combined stake of 56.52% would make Chan the controlling shareholder. However, most of the shares under Mah Wing Holdings and Mah Wing Investment are pledged to various financial institutions.

It has a 5% market share in motor insurance, which contributes close to 80% of its revenue, but has been trying to make inroads in the non-motor insurance market, such as oil and gas, and indemnity. It also has interest in money lending and the information technology sector.

It was reported in June that Pacific & Orient Insurance Co Bhd, a leading local motor insurance player, was set to pull out completely from the third-party motor insurance segment, following the trend of other insurers in Malaysia which have stayed clear of the sector.

The general insurer, a subsidiary of P&O, was second only to Kurnia Insurans (M) Bhd for underwriting third-party motor insurance cover in 2008.

Latest figures from the General Insurance Association of Malaysia (PIAM) showed combined loss ratios for the motor insurance business in 2007 and 2008 standing at 114% and 115%, respectively.

Industry sources estimate that motor insurance, which is compulsory for all motorists, generated gross premiums of close to RM600 million last year, with Kurnia Insurans and P&O Insurance accounting for almost half of the industry’s total.

Prudential said to be eyeing P&O. P&O receives nod to talk to Prudential.
Copyright © 2018 - P&O GLOBAL TECHNOLOGIES INC. | A MEMBER OF PACIFIC & ORIENT GROUP. Miami - Ft. Lauderdale - London - Tokyo - Kuala Lumpur
This website uses cookies to improve your experience. We'll assume that you grant us permission to do so, but you can opt-out if you wish.Accept More
Privacy & Cookies Policy